Home Archives Profile Subscribe
A Winter Project?
We Can All Help...

One of my favourite projects last year was designing and working on a set of pin cushions for the Quilt Fabric Delights Pincushion of the Month Club: Those of you in the club will have received my pattern by now. I know that a few of the club members are fairly novice sewers so I thought I'd show you a few close up shots to help you. If you're a novice, or there's a new technique in the pattern, it's always nice to see a photo as well as using the pattern as a guide. For many of you adding a Ric Rac trim might be a little tricky: So here's a few hints and tips for the pin cushions that have that Ric Rac trim:

1. Cut your Ric Rac with a bit of overhang, like in the below photo.

2. Place your Ric Rac (and pin if you like) just as described in the pattern, and as in the photo below. You want most of the width of Ric Rac facing into the centre of the pin cushion.

4. Sew right to the overhang exactly as shown here: 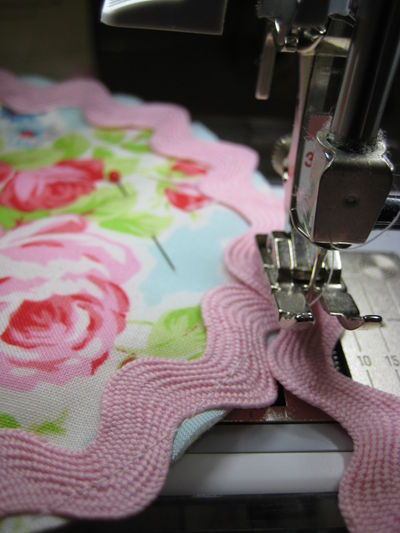 5. Trim the overhang off now, just like in this photo: 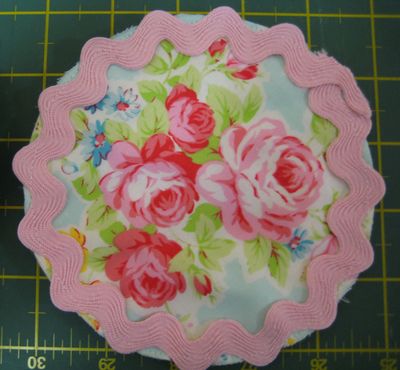 I really hope that those of you in the Pin Cushion of the Month Club really enjoy stitching my pattern. I had a lot of fun creating it!

And Remember: Happy is she who spends her time stitching! 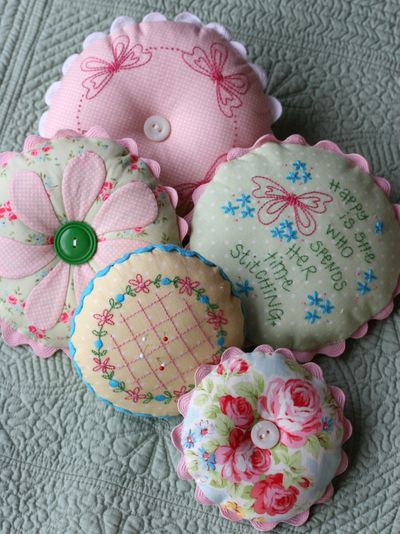 P.S. Sarah has set up a Flickr group for everyone in the Pin Cushion of the Month Club to share their photos, have a look at her blog entry on the 22nd of January 2009 for more information.

Love those pincushions Leanne, if I had a few days free I would join the club. Your segns are so fresh.

Leanne, Hope you and your family are safe. My prayers are with all of Australia.

Hi Leanne,
these are beautiful, you are very clever. Can't wait to see your next creation.

Hi Leanne, I joined the pin cushion club late so I haven't got your designs yet but I thought you would like to know I mainly joined so I could make YOUR pin cushions because I love them, they are so pretty, happy stitching.

Hi Leanne, these pincushions are fantastic......I'm drooling at the sight of these beauties......where can I get these in the UK or can I sign up as an overseas member to the pincushion club????

I just love your pincushions, please tell us folks in the US where to get this pattern or even kit, Pleaseeeeee and thank you.

hi leanne
where can i join the pincushion club please

Hi! I am in US and was wondering how I can purchase the pincushion patterns you show on your Feb. 3 post--they are beautiful! Thank you! Couldn't get the email link to work.

Very pretty! I am going to learnto do needlework someday~my plate overfloweth right now though!

Hello Leanne! I found you through the Stitching Cow and absolutely LOVE your designs. I've added your tutorial to my blog so others can find you as well.

Thank you so much for sharing this sweet design. I'll be making at least one for myself. And I very well may use the embroidery design on a pillow!

It's very nice to meet you! Please stop by for a visit sometime. :)

Thanks Leanne! I am in the pincushion club and just LOVED your pattern, lots of pincushions, I love making them for gifts and for me! Best wishes, Meredith

Thanks Leanne even for us not novice sewers that was a good thing as I would have got there eventually but probably would have involved unpicking. Thanks for the pick might even get a couple of these finished now before the 12th if I can make it into the sewing room if it cools down finally.

Thank you Leanne, for the ric rac tip! I'll soon be starting these cushions!

They are so pretty!

I just got your designs last weekend. I was delighted to see 4 different patterns and so much fabric and embellishments. Thanks for the rickrack info - wasn't too sure how to do that (had visions of hand sewing!).

Those pincushions are ADORABLE Leanne!

The comments to this entry are closed. 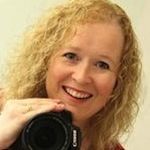 Where you can purchase books & patterns online

Your Creations From My Designs

Down In The Garden

Journey of a Quilter Block of the Month Quilt

Romancing the Roadtrip - The Book

Living the Dream - The Book